Guide to the Battery in the Hero EEG System

A guide to changing and charging the battery in the Hero EEG system.

Verify that the Hero system is turned off via the power switch on the underside of the battery compartment.  Open the battery cover and remove the battery.  Insert a charged battery with the negative pole (flat end) against the spring. 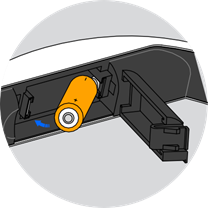 The battery has a microUSB port on it.  This can be connected directly to a 5V power supply via the included cable.  The LED light on the battery will turn blue when fully charged.

Use a power supply that conforms to the UNE-EN60950-1:2007 standard, or damage to the battery could result.  To preserve battery life, remove the battery once fully charged.

If the Hero system is being stored for a long period of time, remove the battery.  If storing the battery for more than a week or two, discharge the battery somewhat (i.e. do not store at 100% charge) or this could permanently reduce the charge capacity.

Note:  Do not charge the battery while in use.

The battery should last for more than 3 hours of continuous operation in the Hero system.  The recharge time should take less than 3 hours.

If the battery duration is substantially reduced, it may be time to replace it.  Contact Bitbrain support for more information.

Note:  Batteries don't last forever!  Over time the capacity and performance will be reduced.  Replace only with this exact approved model.  The use of another kind of battery could cause malfunction, including the risk of fire and explosion.